A Little Knowledge Is a Dangerous Thing

NOTE TO READERS: Due to conditions over which I have no control, I will, of necessity, be posting to this blog only occasionally rather than once a month. If you wish to be notified of posts as they are published, please subscribe by entering your e-mail address in the box on this page. I would appreciate your continuing interest!

ALL TEXT AND PHOTOS © Marlene A. Condon

You may be familiar with the expression, “A little knowledge is a dangerous thing.” In other words, a limited amount of information fools people into thinking that they know more about a topic than they really do, leading to errors in their judgement.

The truth of this saying is currently evident in the popular response to what has been named the Sixth Mass Extinction. "Drastically increased rates of species extinctions and declining abundances of many animal and plant populations are well documented...", according to Robert Cowie, a research professor at the University of Hawaii Manoa Pacific Biosciences Research Center.

Cowie and his co-authors recently published a study in which they estimated that since the year 1500, Earth could already have lost between 7.5 and 13% of the two million known species on Earth, which amounts to 150,000 to 260,000 kinds of organisms. So, what has been the main response to this situation?

From Extension offices across the land (think Master Gardeners and Master Naturalists) to environmental and conservation groups (think Nature Conservancy and Audubon) to the press (think The New York Times and many other newspapers), the public is bombarded with the idea that there’s a dearth of native plants, mainly referring to trees that support moth caterpillars and sawfly larvae that feed birds.

We are told again and again that it’s up to us to start growing more native plants in our yards, especially oaks and other tree species, because native animals evolved with them and therefore require them. Additionally, everyone is made to feel guilty if they don’t remove so-called invasive alien plants that have supposedly replaced native plants. Yet all of this is balderdash that, rather than helping our environment, is instead further harming it.

Fly in a plane or hot-air balloon and you will see that plenty of large native trees exist in older suburban areas, whether around houses or in nearby parks. In rural areas, large swaths of forest (comprising native trees) exist between homes and farms. It should be obvious that a dearth of native trees is decidedly not the reason for the dearth of herbivorous insects (the most common life form sometimes closely tied to native plants).

Yet virtually everyone has bought into this fallacious idea, mainly because of Doug Tallamy, an entomologist at the University of Delaware who has popularized it in articles, books, and talks. All the folks repeating Dr. Tallamy’s nonsensical thesis (including him) demonstrate how a little knowledge is a dangerous thing.

Bringing Nature Home, Tallamy’s first book (published in 2007), made clear his limited knowledge of the environment in its entirety. Unaware of the bigger picture that includes other forces at work, this professor’s ability to discern the real reasons behind decreasing biodiversity was affected by his narrow view of life.

Indeed, the origin of his entire thesis was based upon anecdotal evidence. He had bought former farmland, the degraded fields of which had filled with “at least 35 percent (yes, [he] measured it)...aggressive plant species from other continents that were rapidly replacing what native plants [he] did have.” (From page 11, Bringing Nature Home, advance reading copy).

Dr. Tallamy did not possess the necessary understanding of soil science and life processes to realize that the alien plants were not “aggressive”, nor were they pushing out the native plants on his former farm property. The reality is that farmland consists of soil compacted by half-ton animals and/or heavy farming equipment running over it, and very few native-plant species can grow in that situation.

In fact, if the “multiflora roses, the autumn olives, the oriental bittersweets, the Japanese honeysuckles, the Bradford pears, the Norway maples, and the mile-a-minute weeds” (From page 11, Bringing Nature Home, advance reading copy) had not grown there, he would have found far less diversity of plant life, which necessarily would have meant less diversity of animal life.

The nonnative plants Dr. Tallamy disparages do support many kinds of organisms, just not the ones (herbivorous insects) he wanted to see. Birds, mammals, and reptiles undoubtedly obtained food and found nesting or sheltering sites among these plants. Arachnids and pollinators would have been found here, too.

If, instead, his former farm fields had been hosting Black Locust (Robinia pseudoacacia), Virginia Redcedar (Juniperus virginiana), and Broomsedge (Andropogon virginicus), the primary native species capable of germinating and growing well in the nutrient-poor soil conditions of his property, a much smaller variety of animals would have been found. And Dr. Tallamy would not have found a slew of herbivorous insects on these native plants either.

Not only is Tallamy’s simplistic thesis erroneous on many fronts (a subject for another article), but it also encourages the removal of so-called invasive plants that is often accomplished with the use of pesticides. Removing these plants removes wildlife habitat because mature native plants are not going to immediately replace them. And poisoning plants to kill them has unintended consequences, such as killing any organisms aboveground on the sprayed plants as well as those in the soil.

Chemicals eventually leach into soil where they kill or alter the micro-organisms living there. These creatures are important because they break down organic material to fertilize plants. Toxic chemicals can persist in the soil for years, making it impossible for microorganisms to exist there.

To make proper decisions about how best to care for the environment, it’s vital to take into account knowledge obtained from familiarity with the natural world in its entirety. Doug Tallamy views the natural world through the narrow lens of an entomologist who has mainly studied moths and butterflies.

But moths and butterflies, as well as other leaf-eating insects and the birds that feed upon them, cannot be the sole focus of conservation efforts. We must maintain biological diversity to keep the natural world running properly, and to accomplish that goal, we need to maintain habitat, which doesn’t necessarily mean native plants. We must embrace plants that survive well in the modern world (so-called invasives) and stop poisoning them and the very critters we are trying to help survive.

Reality is what it is, so it trumps theory. Tallamy’s insular speculation overlooks the numerous other factors that have been at work to cause the Sixth Mass Extinction.

·          Any time you must be out at night, observe the houses, buildings, and parking lots. You’ll notice how many unnecessary bright lights are burning. In warm weather, they attract insects—especially moths—which end up dying rather than reproducing.

·          Note on social media how many people mention employing pesticides inside their houses as well as outside to kill a variety of critters. There’s always collateral damage when people use pesticides outdoors.

·          Consider the amount of land now covered over with housing and businesses, thanks to the exploding human population. Many such sites nowadays do not contain much land around them to host plants to host animals, obviously depleting the amount of habitat available.

·          And the more housing and businesses there are, the more windows there are for birds to smash into and die.

·          Additionally, the more people there are, the more cats there are. Cats take a tremendous toll on birds, as well as other critters.

·           Consider the toll traffic takes on wildlife. On my 90-minute walks almost every day throughout the year, I’ve found on the roads dead birds (such as a cardinal, Cedar Waxwing fledgling, a Carolina Wren) in addition to uncountable mammals, reptiles, amphibians, and even insects, depending upon the season. Ask yourself if you could do better to limit the number of vehicle trips you make every day throughout the year. Because the more you drive, the more you contribute to the loss of wildlife.

·          Recognize that alien plants provide habitat; removing them destroys habitat. (You can verify this statement by simply observing how many birds and other animals make use of such plants.)

In other words, a variety of reasons account for the loss of insects and the birds that feed upon them, but a dearth of native trees is not one of them.

If you truly wish to help save the natural world, shut off unnecessary lights and urge others to do the same; avoid the use of pesticides by catching insects and spiders inside your home to put them outside; never, ever use pesticides outdoors (they are unnecessary in a nature-friendly garden); look up ways to make your windows less reflective of the outdoors so birds won’t fly into them (I keep my curtains and blinds closed as much as is possible so birds can see there’s something there); keep cats indoors while urging others to do the same; limit vehicle trips to as few as possible; and leave so-called invasive plants in place. It may be easier to plant a native tree than to take any of the above steps, but it will do absolutely nothing to curtail the Sixth Mass Extinction.

Bradford Pear—Nativists Making A Big Stink about Nothing This huge Bradford Pear has obviously grown for decades in this Albemarle County,... 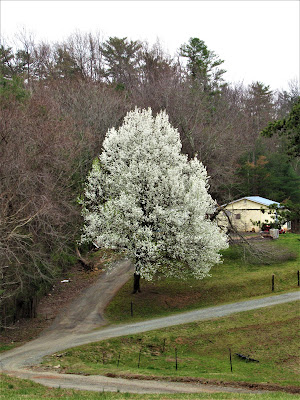 Marlene
Naturalist Marlene A. Condon has a degree in physics. Her scientific background includes published contributions to astrophysical research. She is the author and photographer of The Nature-friendly Garden (Stackpole Books, 2006). You may contact her at marlenecondon@aol.com You can watch a YouTube video from 1994 when her yard was showcased on Virginia Public Television by clicking on the YouTube button above.